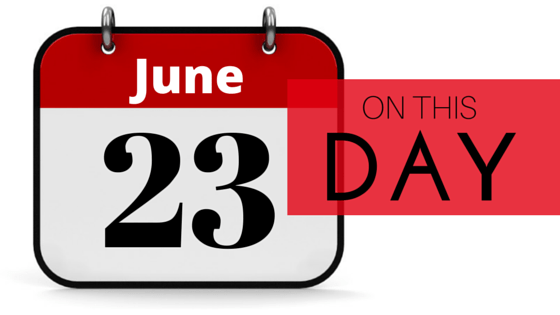 June 23, 1611: Intent on making good time, Henry Hudson presses his crew to continue exploring what is now Hudson Bay; his crew, intent on going home, set him, his son, and several crew members adrift in the bay.

1926:  The first SAT exams are given.  No word on whether or not it became part of the students’ permanent record.

1960: Enovid was officially approved by the FDA for contraception.  Fifty years later, Rush Limbaugh still thinks women who take The Pill are sluts.  (Men who take multiple pills, however, are apparently still okay.)

1964: Joss Whedon joins the world; vampires and spaceships are never the same.

It’s also Pink Flamingo Day (the plastic kind, not the John Waters kind), so go ahead and flock one of your neighbors!

Updated to add: Donald Featherstone, creator of the pink plastic lawn flamingo, died today at age 79. Flock on in his memory.