Let’s start with a history lesson, shall we?

Back in the day— originating in 16th century Italy and flourishing in 17th and 18th century France, if you’re interested— there used to be these things called salons. From Wikipedia:

A salon is a gathering of people under the roof of an inspiring host, held partly to amuse one another and partly to refine the taste and increase the knowledge of the participants through conversation.

Sometimes these salons were held in a lady’s bedroom, her close friends gathered all around as she reclined in bed. Sometimes they were held publicly in coffeehouses. History holds that women dominated salons, acting as organizers, regulators and mediators; enabling interaction and inviting debate between males and females, nobles and bourgeois, intellectuals of all minds and kinds.

This was the age of conversation, the Age of Enlightenment. It was the era of philosophers. People used their goddamn brains, and they spoke out, and they were ready to defend and refine their beliefs and theories, and new things came out of those discussions, and lo, it was good.

With the world wide web, we have the opportunity for another age of enlightenment and we are f*cking wasting it. We can read, discuss, engage on a global scale, in real time. Celebrities, geniuses, butt selfie enthusiasts: we’re all on equal footing on the internet. We could and should be doing great things, exchanging incredible ideas, making history every day.

Instead, people are sharing but not reading. Commenting but not listening. Talking but not thinking. Rather than using the virtual web that connects us all to further our knowledge and expand our worldview, we’re choosing to live in echo chambers of our own making.

The most courageous act is still to think for yourself. Aloud.
― Coco Chanel

If you want to change the world, pick up your pen and write.
– Martin Luther King, Jr.

It’s funny to think that speaking your mind, inviting intelligent debate and quite simply being who you are with all your being has become a revolutionary way of living.

It’s funny for a hot second until you actually think about it, and then it becomes enraging.

No real social change has ever been brought about without a revolution… revolution is but thought carried into action.
-Emma Goldman

Personal transformation can and does have global effects. As we go, so goes the world, for the world is us. The revolution that will save the world is ultimately a personal one.
-Marianne Williamson

Welcome to our modern day salon. We haz opinions— on everything, trust us— and we’re not afraid to publish them. 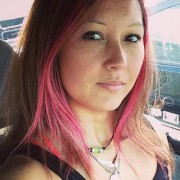