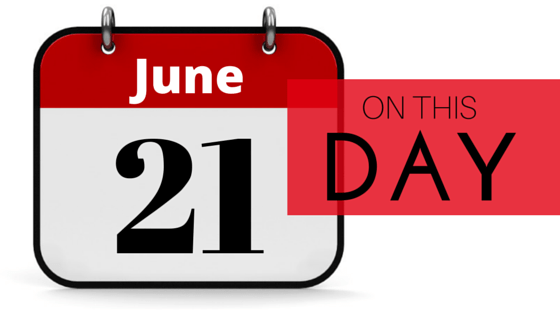 Even Badass Women celebrate Father’s Day*!  While Mother’s Day became law in 1914, it took another 58 years for the dads to get their turn.  Various dates were celebrated annually for most of the 20th century, but it wasn’t until 1972 that the most-cuddliest of American presidents, Richard Nixon, would grant the menfolk their own special day.  Celebrate the fathers (and father-figures) in your life with our Special Edition Today In History.

June 21, 1638: Increase Mather is born in the Massachusetts Bay Colony.  He and his son, Cotton Mather were both influential Puritan ministers, striking serious blows against fun wherever they went.

1791: Louis XVI, his wife Marie Antoinette, and their family flee Paris.  Jean-Baptiste Drouet recognized the king immediately, thanks to his habit of appearing on French currency, and he and his family were arrested and returned to Paris

1939: Lou Gehrig, having been diagnosed with ALS, retires from the Yankees.  Two years later, the “Luckiest Man on the Face of the Earth” passed away of his illness.

Today is also the Summer Solstice– for you sun worshipers, know that days are only getting shorter.    (For those of you dreaming of winter it’s coming, I promise.)  If you’re near Stonehenge, get your druid on in the appropriate fashion.  If you’re not, maybe you should just have some ice cream.

I’ve also been advised that because today is the longest day of the year, it is also Tall Girl Appreciation Day. So go on and appreciate the tall girl in your life with a hug, or a kind word, or Starbucks, or something. (5’9″ and up, babes. Short Girls, you already have an appreciation day, and Average Height Girls, well, every day is your day, because your pants are always the right length.)

If the father-figure in your life is actually handy, he probably already owns a Leatherman.  If he only thinks he is, why not feed his ego for one day a year and buy him one anyway?

For the not-so-handy father, how about a first-aid kit? If he cleaned up your scrapes when you were little, do him a solid and help him out with his own.

Exactly how much of a pain in the ass were (are) you?  For the dad who needs a little help getting through the day, how about a handy flask?  For the well-behaved father, try coffee instead.