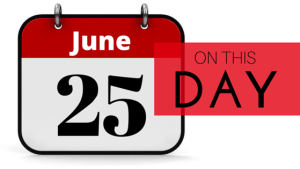 June 25, 1678: Elena Cornaro Piscopia becomes the first woman to receive a Doctorate in Philosophy from the University of Padua.  We can only assume that shortly thereafter, some guy attempted to mansplain Aristotle to her.

1945: Carly Simon is born.  You’re so vain, you probably think this post is about you.

1947: The Diary of A Young Girl, by Anne Frank, is published and puts a face to the atrocities of Hitler’s regime.  Anne may have believed that “despite everything, people are really good at heart,” but we still think Justin Bieber is a jerk.

Today is also National Catfish Day— President Reagan may be been famous for his love of jelly beans, but he is also responsible for the 1987 creation of a day celebrating farm-raised catfish.