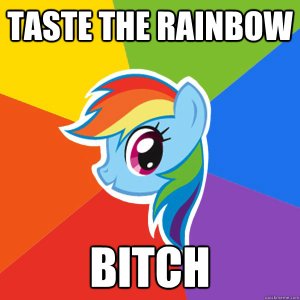 I am a heterosexual, Christian, single woman. And I am here to CELEBRATE THE SHIT OUT OF THE  SCOTUS RULING.

I am no one’s theologian, but let’s be clear. The SCOTUS ruling has not re-defined marriage, invalidated marriage, destroyed marriage, blah blah fucking blah.

Two people getting married should have no impact on your own marriage, unless, of course, you are already married to one of those two people, and you’re not Mormon. If your marriage is so weak that two men or two women getting married can destroy it, you need to take another look at what is going on in your house.

If your faith is so screwed up, you’d rather kill yourself, or completely uproot your life than see gay marriage be legal, or if your faith is God is so skewed that you spend more energy fighting against gay marriage (we can just call it marriage now!) than you do doing the things Jesus actually talked about, you are missing the point of being like Jesus.

You know what Jesus and the architects of the New Testament talk about? Helping the poor and disenfranchised.  Engaging the marginalized. Protecting the weak. You’re supposed to be concerned about things like fighting for the rights of the widows and orphans and those who are victims of violence and poor prison conditions.

If you call yourself a Christian, and vote for politicians who want to de-fund SNAP, you are not following Jesus.  Where does Jesus talk about taking food FROM people in need?

If you call yourself a Christian and you vote for politicians who want to repeal the ACA, you are not following Jesus.  Seriously, I think the Man that raised Lazarus from the dead, gave sight to the blind, healed a leper, and cured the woman with the issue of blood, and all other manner of illness is okay with healthcare for all.

If you call yourself a Christian and vote to disenfranchise a group of people on the basis of something that Jesus did not expressly discuss, you need to do some serious re-evaluating.  You want to ignore ALL OF THE SPECIFIC INSTRUCTIONS and hang your hat on some shit He didn’t even talk about? GTFOH with that twisted religion- sanctioned bigotry.

“Before you speak to me about your religion, first show it to me in how you treat other people; before you tell me how much you love your God, show me in how much you love all His children; before you preach to me of your passion for your faith, teach me about it through your compassion for your neighbors. In the end, I’m not as interested in what you have to tell or sell as in how you choose to live and give.” Senator Cory Booker

If you honestly believe homosexuality is the sin to end all sins, (as opposed to, you know, murder, theft, turning your back on the poor, adultery) then you need to have a little talk with Jesus. And read your Bible.

If I get married tomorrow, do you know what will happen? I’ll get some tax breaks. I may or may not change my last name (more trouble than it’s worth, honestly) I’ll get ‘next of kin’ privileges if my husband ends up in the hospital, and all manner of other perks and goodies, like being a beneficiary on any death benefits as the surviving spouse.

And isn’t that all a marriage is as far as the government is concerned?

You know what changes about my marriage now that with “gay” marriage is legal?

Nothing. None of that changes for me if two men or two women get married.

A religion’s definition of marriage is very different from the governments- and since we’re all about the separation of church and state thing, that’s wonderful news. The IRS doesn’t ask about the religion of my household when I file jointly. My tax bracket doesn’t change if I check Christian. No one on a state and federal level gives a rat’s ass if I was married in a church, the justice of the peace, the Home Depot, or while sitting in a tree.

A marriage is a contract that indicates to the government that you and this other person will be doing shit together from here on out.

Different religions put different spins and meanings on marriage, and call marriage a weighty matter in the eyes of their deity.

And that’s okay too. It is a weighty matter. Religion or not, it is not a contract to be entered into lightly.

Marriage is in your heart. Not in your religious affiliation.  Sorry, religious zealots, your argument is invalid.

If I get married tomorrow, it will be by a pastor. It will be in a church. And Jesus will not bless my union any less because a gay couple is getting married next week. My relationship with God is not defined by anything else anyone else does.

Why should this be?

“No union is more profound than marriage, for it embodies the highest ideals of love, fidelity, devotion, sacrifice, and family. In forming a marital union, two people become something greater than once they were.

As some of the petitioners in these cases demonstrate, marriage embodies a love that may endure even past death. It would misunderstand these men and women to say they disrespect the idea of marriage. Their plea is that they do respect it, respect it so deeply that they seek to find its fulfillment for themselves. Their hope is not to be condemned to live in loneliness, excluded from one of civilization’s oldest institutions. They ask for equal dignity in the eyes of the law.

The Constitution grants them that right. The judgment of the Court of Appeals for the Sixth Circuit is reversed.  It is so ordered” – Justice Kennedy