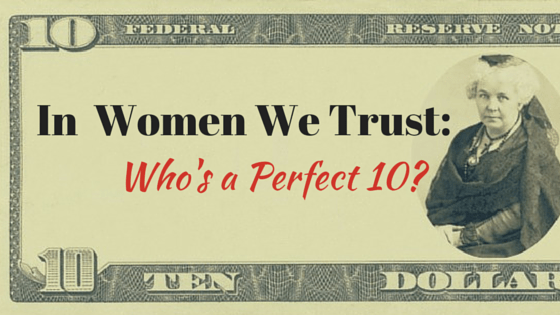 THERE’S GONNA BE A WOMAN ON THE TEN DOLLAR BILL!

There hasn’t been a woman on a piece of US paper currency in over 100 years, and we here at HBR are thrilled. THRILLED.

Now, please understand us. We know that this isn’t going to guarantee us equal pay— and we too would much rather see women MAKE money. We know that this does not come with reproductive rights. We understand that this isn’t the cure to rape culture, or the disease that is domestic violence. We know that if anyone is deserving of the boot off their currency real estate, it’s Andrew Jackson, with his murdering, enslaving, genocidal ass. We will even allow that unless Jack Lew has been living under a rock, he knows it too.

But dammit, we’re gonna have some representation! And it’s not a piece of currency like the coins that aren’t even recognizable as real or useful! They aren’t sticking us on something that’s been pretty much phased out! (Seriously, when was the last time you used a $2 bill? Exactly.)

We’re going to be on the $10. And while it’s admittedly not the best choice, we’re only human, and we admit our instantaneous reactions overrode all logic when Jane told us this was happening:

So this is actually happening!! Except that if we’re removing people from money, Jackson should really be getting the ouster: Woman to Appear on New $10 Bill

Jane:                “Still, Hamilton said he recognizes the importance of having a woman grace one of the bills. Although he hadn’t thought about which woman might be a good fit, he suggested Alexander Hamilton’s wife, Elizabeth Schuyler Hamilton, for the work she did to preserve her husband’s legacy.” WTF SEXIST ASSHOLE.

Jane:                Sojourner Truth was my other guess. It’ll have to be someone from pretty far back to avoid (more) controversy, is my suspicion

Karrie Anne:   Hmmm, I see that. Either way, it won’t be anyone with a hint of controversy attached, like, say, Margaret Sanger.

Karrie Anne:   Well, when you put it like that…

(Jane here: I need to point out that I was referring to Margaret Sanger, not Karrie Anne, when I mentioned “sex-crazed porn-spreader.”  Someone make sure her mother knows that.)

There’s been a lot of talk about why replace Alexander Hamilton, the founder of the American banking system, and not someone a lot more shady, like Andrew Jackson.  (Aside from the aforementioned genocide, President Jackson was actually against the idea of a central bank and disliked paper currency.)  There was even a very successful online voting site, Women on 20’s,  devoted to the topic of replacing President Jackson with a woman.

According to their website, the $10 bill is simply the next in line for redesign.  It was most recently changed in 2006, but was recommended for change ahead of the $20 bill to fight counterfeiting.  Over here at Honey Badger Revolution, we always believe the government, so there will be no talk of conspiracies. Because if anyone supports the recognition of the role women have played in American history, it’s our government.

Weigh in with your candidate in the comments!